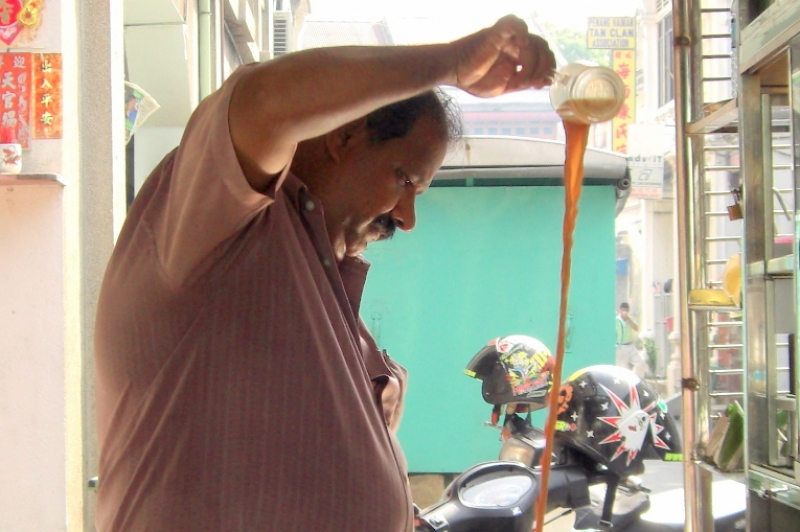 Having once visited Malaysia, I knew Malaysian food was delicious, and, owing to the multicultural nature of the population, multi-faceted. But, until yesterday, I didn’t realize how exciting and entertaining Malaysian food preparation could be. Yesterday I was fortunate to be one of the travel writers and other travel industry professionals invited by Tourism Malaysia to enjoy a dinner presentation in Vancouver that showcased Malaysian cuisine.

In addition to feasting on nasi lemak, chicken satay, roti canai, char koay teow, mamak mi goreng and several other delicacies (the names of which I didn’t write down because I was too focused on devouring them), we were fascinated by the performances of two top chefs who had jetted in from Kuala Lumpur.

First, Chef Mior Sazali gave a dramatic demonstration of teh tarik — tea pulling — pouring spicy Malaysian tea with amazing skill and agility. He never spilled a drop, even when pouring behind his back, standing on one foot. Chef Mior has been winning teh tarik competitions since 1994.

Muhamad B. Arshad, better known as Chef Matt, the Flying Chef, then showed off his talents in tossing roti canai bread dough. Evidently they have dough tossing competitions in Kuala Lumpur, and Chef Matt frequently wins them, twirling roti dough as high as seven feet into the air, and catching it gracefully. We later enjoyed tasting roti canai, but I don’t think it was made from dough that Chef Matt had tossed. The traditional Malaysian flatbread is made from ghee, fat, egg, flour and water that is mixed, kneaded, flattened, oiled, and folded repeatedly before baking.

Malaysians are passionate about food, and their cross-cultural cuisine features flavors from China, India, Thailand and Portugal.

More in this category: « World kitchen: Crickets on, then off, menu at Vij’s Indian restaurant An easy-to-use application will transform your daily diet »
back to top